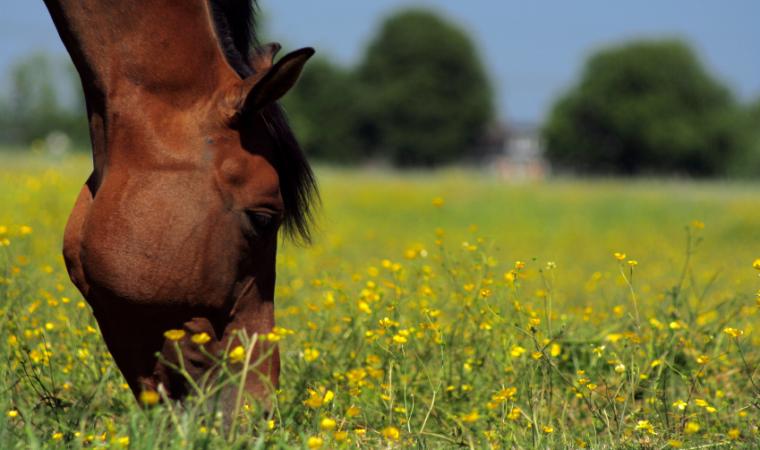 Grass is just a part of the picture with Laminitis

The role of Grass

Over three quarters of horse owners believe that laminitis is caused by access to lush pasture, especially if the horse or pony is overweight1. While grass is an important trigger factor, grazing alone does not tell the whole story. This is why some horses develop laminitis while others grazing the same pasture do not.

In the past, research into the cause of laminitis focused on the role of simple sugars (fructans) in lush grass. It was proposed that eating excessive amounts of fructans could disrupt fermentation in the hindgut, resulting in laminitis. However recent research evaluating grass intake in grazing horses and ponies has shed doubt on this theory2.

Instead, it is proposed that when horses and ponies with an underlying hormonal disease graze and ingest soluble carbohydrates such as fructans, it causes an abnormally high levels of a hormone called insulin.

Insulin is a hormone responsible for moving carbohydrates from the blood into the tissues. There is very good evidence that high levels of circulating insulin results in laminitis in horses and ponies with PPID and/or EMS. In normal horses, without an underlying hormonal disease, grazing pasture is unlikely to cause laminitis.

Talk About Laminitis is a national disease awareness initiative provided by Boehringer Ingelheim Animal Health, to improve awareness and understanding of the underlying endocrine causes of laminitis.